at the University of Siena

at the University of Siena The European Pain School (EPS), founded at the University of Siena (Italy) in 2002, is the first and still the premier school intended for students working on basic science and clinical topics related to acute and chronic pain. EPS has an interdisciplinary perspective and a distinct research orientation. Young scientists at the Ph.D. or postdoctoral levels (or equivalent) in all fields of pain science and pain medicine are encouraged to apply.

In the past the basic mechanisms of pain and the neural pathways involved were explored through research on animals and human subjects using well defined noxious stimuli and observing neurophysiological, behavioral and subjective sensory responses. This straightforward approach, however, is not sufficient to understand most of the real-life spontaneous and prolonged pain states that occur in human patients and animals. Rather, chronic pain involves complex and nonlinear functioning of neural and extraneural systems resulting in the maintenance of the pain process.

Long known are inflammatory mechanisms that can induce a prolonged pain state mediated by pain-producing substances of multiple origin including the immune system, with cytokines stimulating peripheral nociceptors or neurons of the central somatosensory system. Prolonged and enhanced activation of the central pain system may also be due to failure of inhibitory controls in the CNS, a likely mechanism in neuropathic pain. Control by both GABA and endogenous opioids may be affected, causing persistent pain and allodynia. Altered control may also be mediated by cytokines released from activated astrocytes and microglia in the CNS.

The mammalian pain system shows a clear sexual dimorphism that may depend on hormonal influences during peri- and postnatal nervous system development, among other causes. This sexual dichotomy has consequences for pain expression and for psychosocial and medical consequences of pain in males and females, including e.g. the process of pain chronification. Recognition of this dichotomy is resulting in developments in pain medicine that take gender into account.

The European Pain School believes in the advancement of interdisciplinary programs for the ultimate benefit of pain patients, disseminating this vision especially among junior investigators interested in basic and clinical research on pain.

The nociceptive and the immune system, both innate and adaptive, share functional similarities which evolved from the vital necessity to avoid physical threats and to detect damage- and pathogen-associated molecular patterns. These capacities rely on a multiplicity of receptor-equipped excitatory ion channels, including the TRPs, and of G protein-coupled and toll-like receptors. The mutual neuro-immune interaction is based on the release of immunomodulatory neuropeptides, on classical inflammatory mediators, products of oxidative stress, and on signaling via cytokines, chemokines, growth factors, and even miRNA sequences. Located in closest proximity to peripheral nerve endings, cell types such as epithelial cells of the skin and inner surfaces, non-myelinating Schwann cells, and mast cells fulfil both nociceptive and immune functions, sensing noxious stimuli and sending chemical signals to the neurons. In the spinal dorsal horn, glial cells, in particular activated microglia, exert immune functions and take influence on the synaptic transmission of nociceptive input. Also the autonomic nervous system, sympathetic and parasympathetic nerves, take influence on immune cells and exert (anti-)inflammatory reflexes. Neuro-immune interactions play an emerging role in many chronic diseases associated with pain or itch.

Past cycles of the School

With the support of 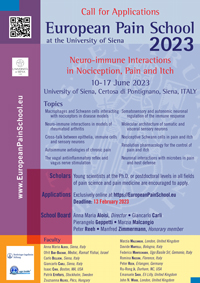 Call for applications
Feel free to download it and distribute in your Institution.

Call for applications
Feel free to download it and distribute in your Institution.